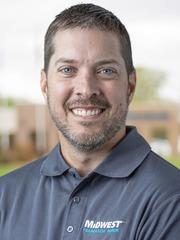 Brandon studied Communications at the University of Northern Iowa. Prior to joining Midwest Foundation Repair, Brandon worked 9 years as a service advisor and 4 years as a service manager. Originally from Waverly, IA, Brandon lives in Marshalltown, IA. He is married to his best friend, Jenni, and has two children, Cameron and Ava. He enjoys golfing, biking, hiking, camping, sporting events and working on cars in his spare time.

At Midwest, we work every day to deliver a wow experience and challenge the status quo. One way we do that is by walking alongside the best in the industry. In Brandon’s words, “strong reputation for excellence, job outlook, working with a team of professionals, and learning about products and services” is why he is excited to join our team.

Before and after photos from jobs I've worked on:
Back to Previous Page Back to Meet The Team