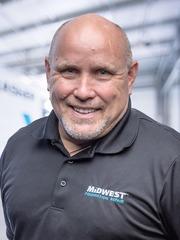 Kevin brings to Midwest experience in transportation logistics, sales and construction. Originally from Bedford, IA, he now lives in Urbandale, IA with his wife, daughters and dog. In Kevin’s spare time, he enjoys DIY projects, fishing and spending time with his family. He likes to attend Iowa State football games.

At Midwest, we work every day to deliver a wow experience and challenge the status quo. One way do that is by walking alongside the best in the industry. In Kevin’s words, “I choose to work at Midwest because of the opportunity to help people and change their lives.” We’re thrilled to have Kevin as part of the Midwest team as we work to redefine our industry.

Before and after photos from jobs I've worked on:
Back to Previous Page Back to Meet The Team