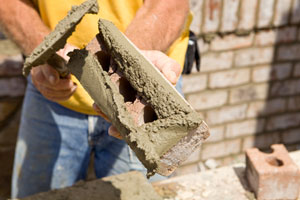 When does a foundation wall replacement make more sense than wall repair? That's not an easy question to answer.

As foundation repair specialists, we have access to the most innovative products in our industry – PowerBrace™ I-beams and helical wall anchors that can straighten and stabilize foundation walls that have bowed, tilted and cracked. But sometimes the foundation damage is so extensive that these repair techniques aren't cost-effective.

Get a Free Estimate

In other cases, older walls simply lack overall structural integrity because of the materials and methods used in their construction.

When an old foundation wall built with native stone and limestone mortar begins to crumble and deteriorate, we usually recommend replacing the wall rather than making an ongoing series of repairs as the deterioration continues. Older houses built with clay tile foundation walls are also frequent candidates for foundation wall replacement.

The idea of tearing down a basement wall and building a new one in its place certainly sounds scary. But when you have an experienced crew doing the work, this job can go smoothly and quickly. After clearing the basement work area, workers will build a strong temporary framework to support the beams and floor joists that rest on the wall that's going to be replaced.

Then the crew will remove soil from the exterior of the foundation so that the ailing wall can be dismantled. In addition to removing the old wall, we usually remove the old footing or excavate enough soil so that a new poured-concrete footing can be installed. Many historic houses were built without footings or with footings made from loose stone.

Replacement foundation walls are typically constructed from concrete block. A new poured-concrete footing provides a solid base for the block wall. As the new wall is erected, workers carefully tie each course of concrete blocks into existing adjacent walls. Once the new wall is complete, the temporary supports can be dismantled.

Valuable Improvements are Part of the Repair Process

If one or more foundation walls need to be replaced, the contractor is likely to recommend several related improvements that can easily be incorporated into the job.

"Bundling" these improvements together will be more economical than having them done separately. Here are the main improvements that can (and often should) be done as part of foundation wall replacement:

Get a Free Estimate

Looking for a price? Get a no cost, no obligation free estimate.